Throughout history God has spoken to His people through chosen messengers, like Noah, Moses, Daniel, Peter, John (the Revelator). What about in these end times? /will God speak through chosen contemporary messengers today?

Act 2:17-21  And it shall come to pass in the last days, saith God, I will pour out of my Spirit upon all flesh: and your sons and your daughters shall prophesy, and your young men shall see visions, and your old men shall dream dreams: and on my servants and on my handmaidens I will pour out in those days of my Spirit; and they shall prophesy: and I will shew wonders in heaven above, and signs in the earth beneath; blood, and fire, and vapour of smoke: The sun shall be turned into darkness, and the moon into blood, before that great and notable day of the Lord come: and it shall come to pass, that whosoever shall call on the name of the Lord shall be saved.

So, “in the last days…before the great and notable day of the Lord come,” the Bible clearly foretells that God will give prophetic “visions” and “dreams” to certain persons. He will also show “wonders in heaven above.” Some of these wonders will involve “fire.” I firmly believe that one of those predicted “daughters [that] shall prophesy” was Ellen G. White (1827-1915), who not only received over 2,000 dreams and visions during her lifetime, but who had two particularly remarkable dreams about “balls of fire” descending upon wicked cities as judgments from God.

Over 100 years ago (1904) Mrs. White was visiting a city in the U.S and had a dream. For many years, certain details were left out of her description so the people could not know exactly where this would be. This is what was published then (1904 and 1909), .

“The night before last a very impressive scene passed before me. I saw an immense ball of fire fall into the midst of some beautiful mansions, causing their instant destruction. I heard some say, ‘We knew that the judgments of God were coming upon the earth, but we did not know they would come so soon.” Others said, ‘You knew! Why then did you not tell us? We did not know.’ On every side I heard such words spoken” (Letter 217, 1904).

“Last night a scene was presented before me. I may never feel free to reveal all of it, but I will reveal a little.

“It seemed that an immense ball of fire came down upon the world, and crushed large houses. From place to place rose the cry, “The Lord has come! The Lord has come!” Many were unprepared to meet Him, but a few were saying, “Praise the Lord!”

“’Why are you praising the Lord?’ inquired those upon whom was coming sudden destruction.

“’Because we now see what we have been looking for.’

‘“If you believed that these things were coming, why did you not tell us?’ was the terrible response. ‘We did not know about these things. Why did you leave us in ignorance? Again and again you have seen us; why did you not become acquainted with us, and tell us of the judgment to come, and that we must serve God, lest we perish? Now we are lost!’” (Manuscript 102, 1904)

“In the visions of the night a very impressive scene passed before me. I saw an immense ball of fire fall among some beautiful mansions, causing their instant destruction. I heard someone say: ‘We knew that the judgments of God were coming upon the earth, but we did not know that they would come so soon.’ Others, with agonized voices, said: ‘You knew! Why then did you not tell us? We did not know.’ On every side I heard similar words of reproach spoken.” {9T 28, 1909}

In all of these accounts we see that some witnesses to the terrible scene KNEW about the coming destruction, but didn’t say anything.

The Bible predicted such scenes, as God so visited Sodom and Gomorrah.

Hos 8:14  For Israel hath forgotten his Maker, and buildeth temples; and Judah hath multiplied fenced cities: but I will send a fire upon his cities, and it shall devour the palaces thereof.

The word for “palaces” refers to dwellings on high places, castles, elevated, such as the wealthy might own… or build. The poor people who live in the “lowly” places would not be affected.

According to historical records, that scene never happened in Mrs. White’s day, anywhere on the earth.

Since Mrs. White’s death in 1915, all her huge library of writings (approximately 5,000 articles, 50,000 manuscript pages, and 40 books) have been under the oversight of the Ellen G. White Estate in Silver Spring, MD. And it wasn’t until July, 2015 that the Ellen G. White Estate decided to finally release the remainder of all Ellen White’s unpublished writings. What is significant about this final release is some specific information about her ball-of-fire dreams—information no one knew for over 100 years. (So the details in the scene she saw, about some people “knowing,” couldn’t be fulfilled. And she identified who those people were!)

This is what we know now.

“When I was at Nashville, I had been speaking to the people, and in the night season, there was an immense ball of fire that came right from heaven and settled in Nashville. There were flames going out like arrows from that ball; houses were being consumed; houses were tottering and falling. Some of our people [Seventh-day Adventists who read Ellen White’s writings] were standing there. ‘It is just as we expected,’ they said, ‘we expected this.’” (Manuscript 188, 1905)

Now we know the city (Nashville, TN), the possible target (an impressive building with pillars), and who the eye-witnesses were (SDAs who were talking about it among themselves – indicating the information was apparently still fresh in their minds).

The first question that comes to mind is, Why Nashville?

Perhaps because Nashville is considered the City of the Occult. Look at this partial list of organizations, stores, meetings, and workshops in Nashville I recently got off of a website.

But what connection would that have to an impressive pillared building? In 1897 a temporary full-sized replica Parthenon was constructed to remind everyone of its claim to being “The Athens of the South.” It was so popular the city replaced it with a permanent one in 1931 as an art museum, and stands as a centerpiece of Centennial Park.

This building happens to be a memorial to the dark side.  Look at the central figurine it houses. This is Athena, Goddess of wisdom, communication, war and crafts. She is 42 feet tall, the tallest indoor statue in the U.S. That “angel” in her hand is a human-sized Nike. And that’s real gold-leaf covering her… and her serpent. 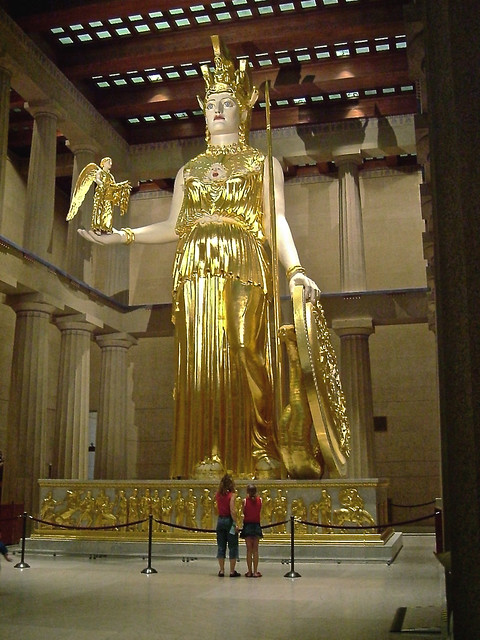 “This really is the only place in the world you can go and see what the ancient Greeks intended.”

God has His eye on that spot. It is being weighed in the balances, and when found wanting? Well, I’ll let you guess.

“Officials with the Marshall Space Flight Center confirmed Monday night that two fireballs occurred in the skies earlier in the evening. Two distinct and unrelated fireballs were seen to the west of Nashville at 6:46 p.m. and 7:31 p.m. Monday.”  Source: WSMV Channel 4 News. January 5, 2015

But Mrs. White had another fireball dream a couple years later. In this dream she didn’t know where she was. Here’s one of several ways how she explained it (in previously released manuscripts).

“Last Friday morning, just before I awoke, a very impressive scene was presented before me. I seemed to awake from sleep but was not in my home. From the windows I could behold a terrible conflagration. Great balls of fire were falling upon houses, and from these balls fiery arrows were flying in every direction. It was impossible to check the fires that were kindled, and many places were being destroyed. The terror of the people was indescribable. After a time I awoke and found myself at home.” (Letter 278, 1906)

You might have noted the difference between these two dreams.

Here is another recently released manuscript relating to these last day conflagrations.

“The wrath of God will come upon all cities, upon dwellings, upon large buildings, so suddenly that they who have the slightest intimation have no safety in dallying at all. They are to flee at once… We are living amid the perils of the last days The wrath of God is preparing to come upon all the cities—not all at once but one after another. And if the terrible punishment in one city does not cause the inhabitants of other cities to be afraid and seek repentance, their time will come.” (Manuscript 233, 1902)

As we see the devil winning more and more souls to his side, we shall also begin to see God working more directly to turn people’s attention to the truth.

But one thing I hope we never hear—what those distraught neighbors said, “You knew, and didn’t tell us?”

Now’s the time to warn them (and keep ourselves unspotted from the world).

Me Blind? No Way!

What Is Revelation 13 About?

If we ever think we understand God's Word or His World it is only because we have stopped studying them.

GET PARTS 1- 2 of 4 FREE!
What Converted Amun? is a story about conversion, using the sanctuary as a model. For ages 11+. Contact me to get your copy.